Time for a refresh and an update :)

All the rocketry content originally available via "I Build Rockets" has now been migrated here and lots new content has been added :)

After a short afternoon launch at a Brunswick park to celebrate the new year, one of my rockets ended up on the roof of the stadium :( So, how do you recover a rocket that's stuck on the edge of a stadium roof?

Our target.. The orange parachute you can see at the edge of the roof 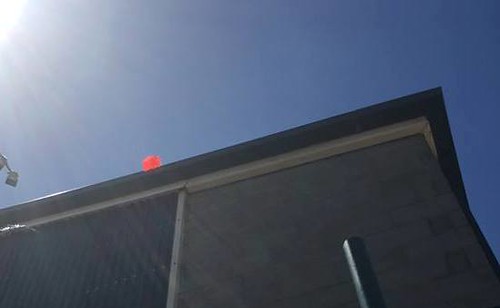 Tools on hand... Cardboard Tubes, PCV Pipe, a couple of bits of dowel, some wood and a roll of gaffa tape...

I wrote this back in 2008 & came across it again today. Thought it might be good for a laugh :)

The UNIX Rocket – You’d receive a box of body tubes, sheets and blocks of balsa, string and a garbage bag – no instructions included. However, you can get instructions on the Internet if you're willing to dig your way through 700+ pages...

You’ll need to whittle your own nosecone, design & cut your own fins and make a parachute (or streamer) out of the garbage bag. You will need to compile your own motors. Everyone’s UNIX rocket will be different and everyone will tell you that their UNIX rocket is better than yours.

The Microsoft Rocket – Will come in a fancy box and initially be called 'Rocket' and have a stylish 'R' as it's logo, but after a patent challenge, it will be renamed 'MS Rocket'.

The instructions will be preceded by an image of a talking paperclip saying “It looks like you’re trying to build a rocket…”. The MS Rocket will look fancy, fly slowly, and crash often. One fin will fall off when you least expect it.

The launch controller will comprise of a series of buttons. Launching your rocket will require the simultaneous pressing of several buttons on the face of the launch controller, needing the dexterity of a 6 year old. If the rocket fails to launch when you press the launch buttons, you will need to remove it from the launch rod, remove the engine, remove the parachute and wadding, repack the parachute, put the wadding back in, put the engine back and reposition on the launch rod.

Everyone will have one. Everyone will bitch about the performance. Everyone will get a new one when it’s released expecting it to work better – it won’t. When you do buy a new MS Rocket, you will be forced to upgrade your old launch rod & controller. Your old motors will not fit. If you decide that you prefer your old MS Rocket more, too bad. You’ll be stuck with the new one.

MS Rocket owners will feel superior to UNIX Rocket and Apple's iRocket owners since they have 'the Industry standard' rocket and will go on about the upgradability of it, however they will find that when they do go to upgrade, their version of MS Rocket will no longer support the latest upgrades, requiring them to buy a new one anyhow. There will be a thriving industry of counterfeit MS Rockets available at your local Sunday market.

The Apple Rocket – After months of speculation, a 'RocketWorld' conference will be announced. A lone figure wearing clothing last sold in the late 70's will introduce the ‘iRocket’ to a packed auditorium resulting in a full 10 minutes of cheering. He will explain that this is the future of rocketry. It will come in a basic box with an image of the iRocket on the front. It comes pre-built. Apple will offer several models that look identical.

They will release new iRockets every few months, everyone will want one despite the fact that they look almost the same as the old iRocket. The release date will be timed such that the new iRocket will be released just a week after you purchase the now old model. It will be over-priced, you won’t care. The motor cannot be changed. Apple will expect that you simply throw out your old iRocket after you fly it and buy a new one.

3rd party manufacturers will release an iRocket motor kit. The launch controller will only have one button, but by pressing it in different ways you will be able to check the continuity of the igniter, arm the firing system and launch the iRocket – however you will never be fully sure that you’ve pressed the button in just the right way. iRocket owners will be secretly envious of the multi-button firing system that comes with the Microsoft Rocket.

The first people in line will find that they can't fly the iRocket for some weeks due to niggling faults - Apple will call this a feature. The Space Cadet - Now available from The Rocketry Shop for $35

More photos after the jump...

To Williams and Back in 15 days.

This year I took the opportunity to do something big - drive from one side of Australia to the other and back, a round-trip of a little over 7900km (4900mi). The great Aussie road-trip!

The main purpose of the trip was to attend the Williams "Wildfire" Westernationals event near Perth, Western Australia. Organised and hosted by the good folk at Tripoli Western Australia for the past 3 years, with 2012 being the 4th.

Along the way, stops were made at Woomera, The Great Australian Bight, the Perth Zoo and Wave Rock as well as crossing the Nullarbor Plain. Check out the full set of photos (broken up by each day) here.

I Made the Local Paper!

Despite being eliminated from the iiNet TopGeek competition during round 2, I did get a story in the Dandenong Leader newspaper! The email I received from iiNet said that I only missed out winning my category (Tech) by a few points, coming runner up. Oh well! I'll try again next year!!

iiNet, an Australian Internet provider, has been running the TopGeek competition for a few weeks now. I figured I would enter and see how far I could get. Round 1 is now over and thanks to quite a few friends I got enough votes. I have made it into Round 2 - I'm now in the top 50!

Round 1 was all about votes. Round 2, however, is about creativity. The task for me, being in the Tech category, was to invent something. Naturally enough, I invented a rocket!

I invented the GEEK rocket :) You can download the RockSim file from Here. I also had to provide supporting documentation for my invention. I have packaged that up as a PDF file and you can read it Here. (I'm using box.com to host the files, any problems drop me an email)

Once more eBay has turned up another gem of rocketry history. This time in the form of a little brown box by Aurora. But what is it? Photos of the box contents and more information after the jump!

Recently, while looking at all the rocketry stuff on eBay, I came across this little bit of rocketry history. These old Cox B6-6 motors are dated 28th April, 1971! They are in perfect condition and I'm pretty sure that if I was to load one up into a rocket (something that I'm not going to do!) I would get a perfect flight. For a long time I've used a plastic storage tub for my low-power BP motors and decided to use this old army surplus ammo box for my motors. I picked this up recently partly because it was cheap ($5) but mostly because it looked cool. When I originally got it, there were some markings in white paint on the outside of the box - denoting the original contents. I removed this with 'goo off' without damaging the underlying green paint.

I laser-cut a stencil and applied new markings :)

I still need to line the box with MDF before I load it up with motors, but once done, will perfectly fit 18mm motors across it's width.